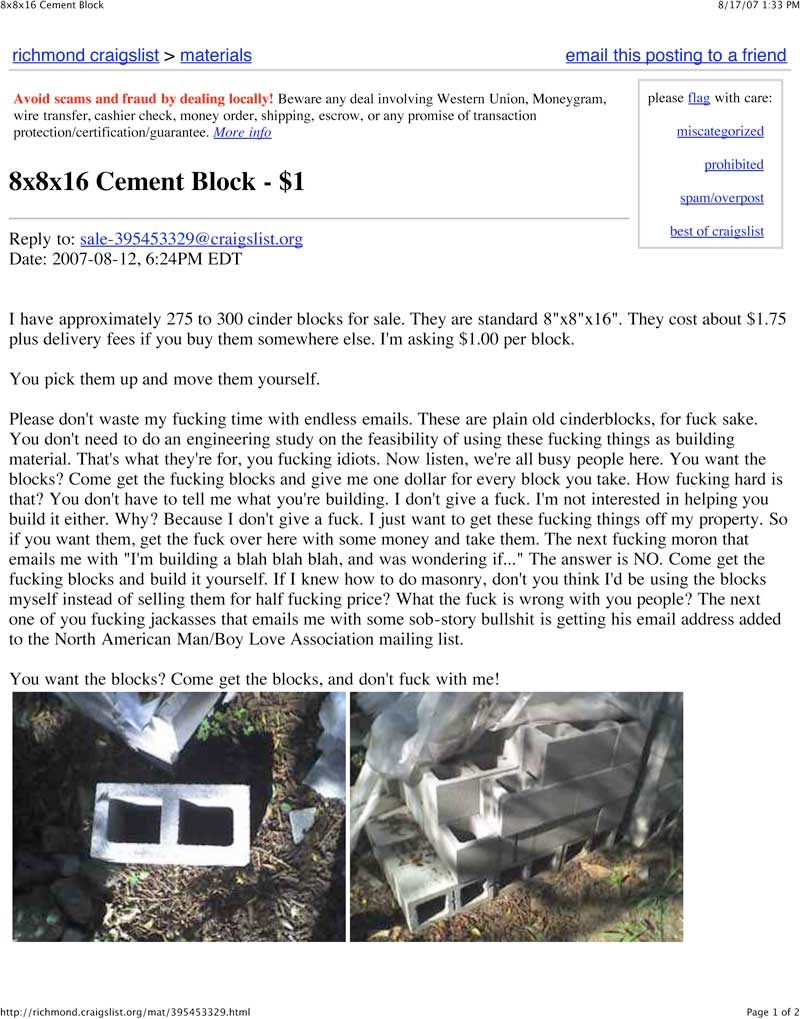 Funny Graffiti - My bra her!

Google maps:
-From here to there
-From kissing to fucking
-From heaven to hell
-0 to 60 in 10 hours 43 minutes

a danish student wrote:At my first year of college my physics teacher told us this rather amusing story, I’ve never forgotten this story - but I certainly have forgotten everything I learned in that class.

The following question was asked at the University of Copenhagen in a physics exam:

“”Describe how to determine the height of a skyscraper with a barometer.”

This highly original answer so incensed the examiner that the student was failed immediately. He appealed on the grounds that his answer was indisputably correct, and the university appointed an independent arbiter to decide the case. The arbiter judged that the answer was indeed correct, but did not display any noticeable knowledge of physics. To resolve the problem it was decided to call the student in and allow him six minutes in which to provide a verbal answer which showed at least a minimal familiarity with the basic principles of physics. For five minutes the student sat in silence, forehead creased in thought. The arbiter reminded him that time was running out, to which the student replied that he had several extremely relevant answers, but couldn’t make up his mind which to use. On being advised to hurry up the student replied as follows:

“Firstly, you could take the barometer up to the roof of the skyscraper, drop it over the edge, and measure the time it takes to reach the ground. The height of the building can then be worked out from the formula H = 0.5g x t squared. But bad luck on the barometer.

“But if you wanted to be highly scientific about it, you could tie a short piece of string to the barometer and swing it like a pendulum, first at ground level and then on the roof of the skyscraper. The height is worked out by the difference in the gravitational restoring force T = 2 pi sqrroot (l/g).

“Or if the skyscraper has an outside emergency staircase, it would be easier to walk up it and mark off the height of the skyscraper in barometer lengths, then add them up.

“If you merely wanted to be boring and orthodox about it, of course, you could use the barometer to measure the air pressure on the roof of the skyscraper and on the ground, and convert the difference in millibars into feet to give the height of the building.

But since we are constantly being exhorted to exercise independence of mind and apply scientific methods, undoubtedly the best way would be to knock on the janitor’s door and say to him ‘If you would like a nice new barometer, I will give you this one if you tell me the height of this skyscraper’.”

The student was Nils Bohr, the first Dane to win the Nobel prize for Physics. “